It was clear that the party atmosphere from the SAW conference was still in the air, as members gathered to listen to and celebrate a total of 18 placings in this year’s competitions. 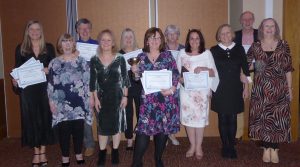 Jeanette hosted, guiding us through the list of successes. Despite apologies from some winners who were unable to attend, we were provided with an array of talent in a variety of genres, with the added interest of hearing adjudicators’ comments on winning work.

To kick things off, it was the non-fiction book competition. Linda Brown was the big trophy winner, achieving 1st Place but, with her also attaining an unexpected win in the Poetry category, Linda chose to share it with us rather than her book entry. However, Damaris West had achieved 3rd place in this category and so we were treated to Chapter 6 of her book Two Heads are better than no Hat, a title which won plaudits alone. Damaris explained this unusual title: her husband, Clive, had been famed for garbling proverbs, this being her favourite! The book records their life together and judging by the vivid description of arriving in their sparse and chilly new home in Italy, this will be a fascinating read.

Chris Palmer was up next but shocked our President with his refusal to read! However, there was method in his madness. Having previously read his Woman’s Short Story at the club he chose instead to give us an insight into its origin, and its subsequent journey through various competitions and adjudications which proved fascinating. His story sprang from two sources: a poignant letter in the Ayrshire Post from a man in his 70s trying to find a lady he’d met at the bus station, as well as Chris’s knowledge of the case of someone who, after losing their partner was unable to say the word ‘dead’. Melding these two elements – along with a happy ending – created a story which has proved successful in various competitions.

And so, it was time for Linda to share her ‘mither tongue’ poem Top Hats which gained 2nd place in the Poetry Category. (I’m seeing a ‘hat’ pattern here!) Triggered by heart wrenching media coverage of poverty-stricken children in the 21st century, Linda drew on her own memory of a primary 2 child at a Sunday School Party, whose neglect and hunger she described in poignant detail, scabs and snotters, and all.

Next it was time for Jeanette’s moment in the limelight, talking about her special, poetry prize (a box of chocolates presented by adjudicator Tracy Harvey) for her poem, Good Stuff, which in two memorable lines summed up the experience of so many would-be writers!

At tea-break time, there was the opportunity to hear so much more from all our club members who had experience such a good time at the conference. That’s all I’m saying!

In part two of the evening, we moved on to hear the whole wonderful tale of Elbow the Elf, Greta Yorke’s self-published children’s book which was placed 3rd in this category. Suddenly we all became children enthralled by the story of the little elf who saved the day when Santa lost his magic key. Ending with a very good lesson learned, it was such a delight.

As for the next category, what a farce it was! No, really! In the drama category, 2nd place went to Helena Sheridan’s farce, A Ring, a Ring for Rosie – another great title. Maggie Bolton aided Helena in giving us an extract from this hilarious tale as Rosie tells her sister of her engagement to a minor criminal who was in the act of picking an impressive – stolen – ring from the floor when she happened upon him. Interpreting his speechlessness for the nervousness of proposing, Rosie said ‘yes’, immediately. Very entertaining.

Next up was the General Short Story Competition. Nigel had us spell-bound with his reading of his Highly Commended Dragging Life Around, a powerful, and well-observed piece about a couple of teenage lads who had long been friends. The protagonist is perturbed and puzzled by his friend’s out of character behaviour but ignores his anger and continues to offer friendship. The dramatic conclusion shocks the reader, as well as the protagonist, when it is revealed that his friend is grieving the loss of his mother. Beautifully told.

The final category was the novel competition. Helena Sheridan read an extract from her cosy crime novel Abigail Eyre Mysteries. Hairdresser, Abigail, of ‘Eyrestyles’, is alarmed at being asked, by the local funeral director, to provide her services for recently deceased Lillian, a former client whose mysterious death from a fall onto rocks, is the talk of the town. There is too much gossip and speculation around the death of the widow for Abigail’s liking. But what will happen next?

To round off the evening, two brave club members – Fiona McFadzean and Chris Palmer – who had entered the DRAGON’S PEN event, revealed how scary it had been to put themselves forward, and pitch a novel in only 3 minutes. Neither would wish to do it again, but it was encouraging to us all to hear of the positives of going outside your comfort zone and gaining much, despite not ‘winning’. Well done both.

And well done to all our winners, present last night or not.